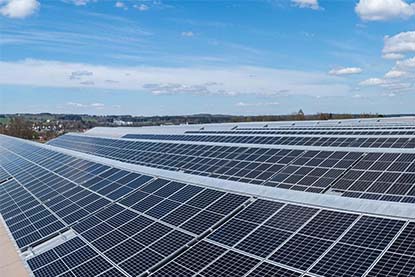 The full expansion of the photovoltaic system on the entire roof area of the Kaufbeuren plant is to be completed by the end of 2022. 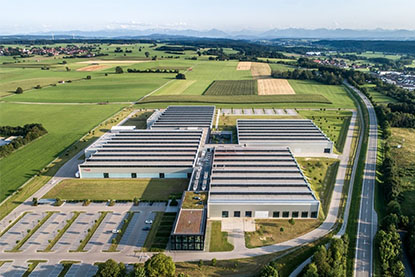 Ideally aligned to the south, the photovoltaic system on the roof of the Kaufbeuren plant will cover ¼ of the electricity demand on site.

The roadmap sounds ambitious: HAWE has set itself the goal of being climate neutral in Scope 1 and 2 throughout the Group by 2029 at the latest. The cross-plant sustainability team knows what that means and has clearly outlined the necessary steps. Since 2010, the company has been active in various energy efficiency and climate protection networks and is consistently trimming its own manufacturing and administrative areas at all HAWE sites for energy and resource efficiency.

In order to achieve this goal, employees responsible for projects regularly compile measures. But all employees are also called upon to report potential savings and make suggestions for improvement. By 2026, all HAWE production sites in Germany, including the headquarters, are to be climate-neutral, and by 2027 at the latest, all HAWE sites in Europe. The new construction of the largest plant in Wuxi (China) marks another major step in the international plant network.

Over 145 energy efficiency measures have been implemented in recent years. Particularly effective examples include the conversion of all production sites in Germany to LED lighting and the installation of various heat recovery systems. Since 2021, the power supply of the German HAWE sites has been 100% from renewable energy sources. Fittingly, the full expansion of the photovoltaic system on the roof of all 4 halls of the 40,000 m2 production plant in Kaufbeuren is to be completed by the end of 2022. Then, with an installed capacity of approx. 2,800 kWp, a quarter of the site's total electricity requirements will be generated from renewable energy sources.

In the last few years, all measures have prevented a total of almost 12,000 tons of CO2 and achieved a reduction in direct and indirect emissions of more than 70%.