Official opening of the new HAWE Mattro plant in Schwaz 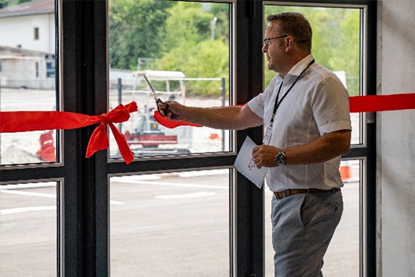 In July, the new HAWE Mattro location in Schwaz was officially opened. Around 60 participants attended the event, including customers from Switzerland, Germany, Italy and Austria, as well as partners, suppliers and several HAWE employees.

On Thursday, July 14, a customer event took place at HAWE Mattro in Schwaz, where the guests could inform themselves about the main focus of HAWE Mattro at information booths and learn more about battery & exchange frames, the robot platform ROVO and also about system components and mobile hydraulics.

Interested parties could additionally test special applications, including an electrified excavator and a vintage car from HAWE Mattro directly or complete a parkour with the ROVO. With the guided tour through the plant, it quickly became clear to the participants that the new building in Schwaz reflects the orientation and relevant topics of HAWE Mattro: Modernity, Future Orientation & Electrification.

Meanwhile, around 35 employees are active at the site on 3,000sqm, with 2,000sqm dedicated to production. The batteries, as the heart of the drive, are developed and built in-house with great know-how of the colleagues involved. The next day also included the official opening by the builders and the blessing of the new building.