Management of the green areas around the Kaufbeuren plant with sheep 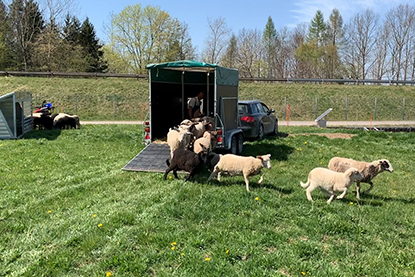 In 2020 HAWE will continue to have the 3.5 hectares of green space around the Kaufbeuren plant managed by sheep. The initial idea for the use of sheep was already taken up by an employee about 5 years ago, as the effort to mow the seepaging ponds and areas with a high proportion of trees is very high.

For the keeping of sheep HAWE has been registered with its own farm number at the Amt für Ernährung, Landwirtschaft und Forsten Kaufbeuren since February 2019. Agricultural businesses register the arrival and departure of animals there.

The test phase since the end of April last year has shown that HAWE is able to manage the green areas more ecologically and with less effort with the support of the sheep. In the process, the difficult to work on green areas could be worked more efficiently, costs could be saved and the mechanical effort could be reduced. In particular, the management of the seeping ponds is much easier with the animals.

Last year's project was once again significantly enlarged. On Friday, 17.04.2020, a large part of the 50 sheep was received in Kaufbeuren. The rest will follow this week. Last year there were "only" 20 sheep in comparison.

Due to the current situation around the coronavirus the reception of the sheep took place without a certificate handover and visitors or HAWE spectators.

The HAWE employees are also fully integrated in the project again. They have the possibility to take over sponsorships for the sheep. For this purpose the sponsor receives a certificate with the name of the animal he/she has given. All sheep have found their sponsors within a short time. Also many departments can call a "department sheep" their own.

The project is again planned as an apprentice project. So trainees have been working on a stable for the animals for several weeks and months. This includes the planning and construction of the barn as well as welding, drilling and riveting. The hydraulics for the stable are completely made of HAWE components, except for the hydraulic cylinder. For example, a HAWE hand pump is integrated, with which the wheels can be adjusted accordingly. This makes it possible to move the shelter easily. In addition, the trainees will take over the care of the animals. 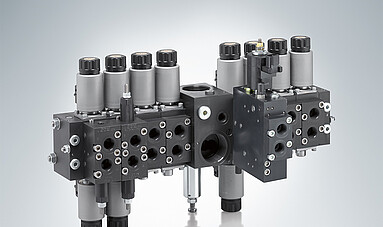 HAWE Hydraulik SE, offers a compact, hydraulic control block that reliably and accurately controls the weight of the cutting unit of combine harvesters and mulchers. The user gets the best cutting results with maximum soil protection.